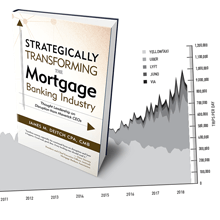 Disruption in the transportation industry led to the failure of several financial institutions in New York State. If anything, these examples show just how quickly disruption can transform an industry.

Uber arrived on the scene in 2015 and ridership of Yellow Cabs fell precipitously. New York City as well as Chicago, Boston, Philadelphia, and other cities regulate cab hailing via “taxi medallions.” The increase in competition and its impact on New York Yellow Taxi ridership is evident in the chart below. Uber’s ridership surpassed the New York Yellow Taxi ridership in May 2017. This feat was accomplished in under three years. Other ride services such as Lyft, Juno, and Via have entered the New York market to capitalize on Uber’s market expansion success.

There is a direct and opposite correlation between Yellow Taxi ridership and taxi medallion prices, whose value is dependent on the cash flow streams generated for the driver from rider fares. Fewer riders taking Yellow Taxis equates to less income from fares and tips collected by the taxi drivers. This ultimately depresses the demand and prices for taxi medallions.

In the past, Credit Unions and other financial institutions originated loans secured by these taxi medallion assets. They viewed them as lower risk loans largely due to the stability and continued upward appreciation of the taxi medallion prices to back these loans. For years, prices of taxi medallions escalated, just like home prices through 2006. Then, Uber…

The sudden change in the ride services landscape changed the status quo. Financial institutions holding loans backed by taxi medallions faced a dilemma – the $1,000,000 loan that they originated and hold on their balance sheet is now backed by an asset worth $200,000. What if the borrower decides to stop paying, such as in strategic default, or is unable to make payments on the loan due to the decrease in monies collected from fares? The impact has been and continues to be significant and widespread.

Developing your own Strategic Levers
The Transformative Executive is a ‘Maverick’