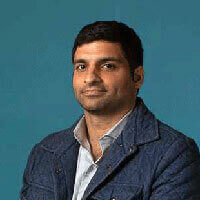 Mr. Ghamsari serves as Chief Executive and Co-founder of Blend, a Silicon Valley Technology company empowering lender to originate efficiently and keeping user friendly surface. Prior to his position at Blend, Nima was a business development engineer and worked as an advisor for the CEO at Palantir Technologies.

It’s no secret that the mortgage process is broken.

At its core, today’s lending technology lacks robust data infrastructure to serve the needs of tomorrow. To build a more secure system that uses verified source data and a more accurate view of a consumer’s financial picture, we need to rebuild and rethink.

It’s important to have the overall experience, process, and workflow documented, but to undertake implementation in steps.

[Manifest] constant improvement towards the right vision, towards that perfect Nirvana world that everyone wants… but don’t wait for the Nirvana world before you make a move.

It’s critically important that the overall experience, process, and workflow be understood and documented so that the highest value technology components can be implemented first.

If we waited for everybody to solve all these things before we released our product, we’d be having this conversation in 2030.

Nima Ghamsari’s vision for mortgage banking has its roots in demystifying the consumer mortgage experience. This can be achieved, he believes, by enacting small steps that in time will yield bigger results industry-wide. As a technology innovator, Mr. Ghamsari does not believe in holding back until the industry adopts tech or until that tech is perfected. Rather, Ghamsari encourages getting solutions up and running and sees the incremental effects of this as hugely beneficial to financial institutions in the long run. In that sense, Ghamsari represents a broad vision of Strategic Transformation, with a focus on access to data and technology that adjusts to real world needs.
With regards to tech adoption, Mr. Ghamsari believes the time is now. He sees adoption as becoming more and more accelerated and recovering from the slowdown affected by regulatory compliance after the Recession.
Finally, Mr. Ghamsari sees a lot of room for the human touch in the process, despite his role as a fintech innovator, citing human interaction as the best way to parse finer points such as credit.